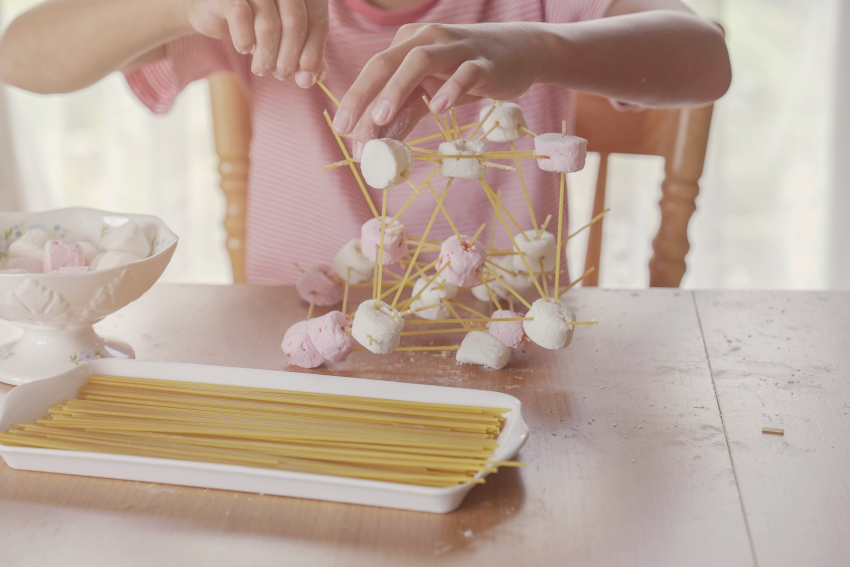 Around twenty years ago, Peter Skillman conducted a test referred to as “the Spaghetti Problem.” He brought together various groups worldwide, from Taiwanese telecom engineers to American MBA students to lawyers. Each group of 3-4 people was given twenty pieces of raw spaghetti, a meter of tape, a marshmallow and a bit of string. They had 18 minutes to create the tallest freestanding structure that would support the marshmallow. As expected, the engineers excelled at the exercise. However, the group that achieved the most outstanding results was none other than a group of kindergarten students! It may have looked like a five-year-old created it, but their structure won the contest.

How did these kids beat everyone else, including engineers? Two reasons. First, they didn’t get bogged down by failure. If something didn’t work, they took it apart and tried another way, continually experimenting and failing until they learned from their mistakes and succeeded. But more than that, all the other groups, all the adults, were locked in to certain assumptions – the materials in front of them were what they saw and therefore assumed that was what they had to work with. However, the kindergarten kids saw that they needed more spaghetti, so they asked for more and were given more. Because they had more, they didn’t need to waste time worrying about design, they just built. They were able to see beyond what was in front of them and recognize its potential to help them achieve success. (The Up Side of Down: Why Failing Well is a Key to Success, by Megan McArdle, Chapter 1).

In this week’s Parsha, B’nei Yisrael were told that G-d would bring them to Eretz Yisrael, described as an ארץ טובה – a land of good. The verses go on to list the many good streams and water sources, the Shivat haminim – the seven species the land is blessed with, and a land where you will lack nothing.

What doesn’t seem to fit the category of ‘good’ is the following verse which states: “ארץ אשר אבניה ברזל” – “A land whose stones are iron.” How do stones that are iron fit into the list of “good” that Bnei Yisrael will benefit from? Furthermore, the following verse concludes ואכלת ושבעת וברכת את ה’ אלוקיך על הארץ הטובה אשר נתן לך” – “You will eat, and you will be satisfied, and bless Hashem, your G-d, for the good of the land” which makes it sound like the blessing is referring to the above list, why would rocks be included in this list?

Kli Yakar notes that the Talmud (Taanit 4a) suggests that the rocks, אבניה, is an allusion to בוניה – the builders of Torah referring to the Torah scholars of Eretz Yisrael which is a benefit beyond food.

However, on a simpler, more literal level, I saw suggested that perhaps the Torah is coming to teach us that when we can look past assumptions that we superficially see, the seemingly worthless rocks, we can recognize the potential hidden within, precious metals of iron. Only then are we able to reach a point of “וברכת,” truly blessing and thanking G-d for all that which He provides us with and feeling blessed even when it seems we were given useless stones in our lives. Like the kindergarten kids, we must not get bogged down with what appears before us as mere ‘rocks’ (or stumbling blocks), but instead, remember to always look beyond to achieve success in life.